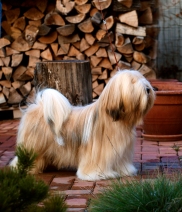 Brooklyn is a love at first sight. Everybody loved him since he was a small puppy. He stood out in the litter, always full of himself, always ready to go. He is a strong male, powerful mover with excellent proportions, lovely head and expression. 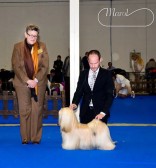 BISS at the Tibetan Breeds Club Specialty in 2014

We took a while to show him, until his coat was grown, but he took the rings by storm. Brooklyn won his BISS at the second show he went to. He was placed in the group from the start and in 2015 has already won the Group 1 several times in Slovakia and Austria and was even placed res. BIS at the IDS Graz. I love to show this dog, as one thing he does best is move. I can always depend on him giving me 100% and more. What a joy and what a thrill for a breeder.

Brooklyn is co-owned with my friend Ľubica Červeníková, who takes wonderful care of him and his coat. He has a happy home with her and her dogs.

This site uses Akismet to reduce spam. Learn how your comment data is processed.